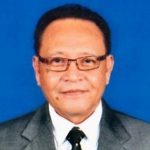 Daddy Ruhiyat is a professor of forest soils in the Forestry Faculty of Mulawarman University. He has been at Mulawarman University since 1973 and was the Dean of the Faculty of Forestry from 1994-2000. Additionally, he served as an expert staff member of the Governor of East Kalimantan in the field of Natural Resource Management and Environmental Issues from 2008 to 2010 and since 2011, has been the Chairman of Provincial Climate Change Council (DDPI) of East Kalimantan. He graduated from the School of Forestry, Mulawarman University in 1977. He received Masters degree from the Tokyo University of Agriculture and Technology, Japan in 1982, and his Doctorate from Georg August University of Goettingen, Germany in 1989.