Brunei Darussalam is a country rich in culture and heritage, located on the northern shore of the ecologically rich island of Borneo. Its total land area is about 5,765 km2 with 75 percent still covered by forests. Brunei’s population is just over 400,000, made up of two-thirds ethnic Malays, with the remainder being ethnic Chinese, Indian and indigenous groups.

A united sultanate, Brunei Darussalam is made up of four districts, namely Brunei or Muara (which includes the capital, Bandar Seri Begawan), Temburong, Tutong and Belait. ‘Darussalam’ is an Arabic word for ‘Abode of Peace’, and reflects Brunei’s Islamic history that dates back some 1,500 years. Today, Brunei remains the world’s only Malay Islamic monarchy, with an unbroken royal lineage that has ruled the nation for the past 600 years.

Brunei is arguably best known today as an oil-producing country. The nation gained its independence in 1984 and, thanks to its large reserves of oil and gas, now boasts one of the highest standards of living in the world.

Speakers, participants and supporting staff at the Asia-Pacific Rainforest Summit will be issued with identification passes, which they will be required to wear at all times. Delegates are asked to cooperate by displaying their identification passes on entry to the event venue and during other related activities.

Photocopying and other secretarial services will be made available to speakers and participants wherever possible. Requests should be made directly to the Secretariat Committee members (2ndaprs.secretariat@gmail.com).

Power supply is 220 – 240v, 50 cycles. The PAL and NTSC systems are used by local television. Tap water is generally safe to drink, although some take precautions by boiling. 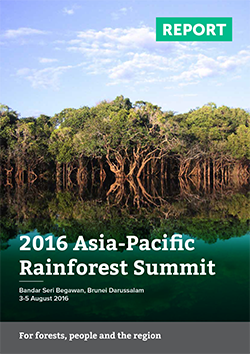