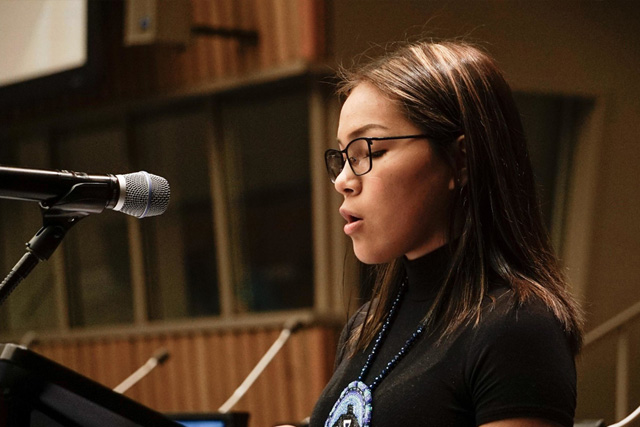 UNITED NATIONS, New York (Sept. 30) – Water is a basic human right, said Autumn Peltier, a 15-year-old Indigenous activist from Canada in an address to the Global Landscapes Forum (GLF) at the United Nations in New York.

“We all need to think about the planet and work together on solutions to reduce the impacts of human negligence,” she said, a day after climate strikers inspired by youth environmental activist Greta Thunberg, spilled into the streets around the world to protest human-generated global warming.

“Mother Earth has the power to destroy us all and if we keep harming her, one day she may decide to destroy everything,” said Peltier, who draws attention to frequent boil-water advisories and restrictions on using freshwater on Indigenous lands in Canada.

Her remarks launched GLF New York, a day of talks and presentations that brought together youth activists, business leaders, policymakers and scientists to galvanize action on the upcoming U.N. Decade on Ecosystem Restoration (2021-2030). The initiative, which recognizes that restoration and other natural options could contribute more than a third of the solution to the climate crisis, aims to clean up and restore land and waterways on a massive scale, providing an urgently needed buffer against global warming.

“When we strike, and when we protest, and when we make our voices heard, what we do is we fracture the system,” said Alexandria Villaseñor, founder of U.S. Youth Climate Strike and Earth Uprising. “Our political systems aren’t built to handle these problems. Our system needs to change.”

The decade will help tackle the pressures of population growth by encouraging governments to embed sustainable ecosystem management strategies into practical policies and practices.

Forests, along with croplands, wetlands, oceans and other natural ecosystems will be targeted for restoration during the decade, which will be led by the U.N. Environment Programme (UNEP) and the U.N. Food and Agriculture Organization (FAO) with partners GLF, International Union for Conservation of Nature (IUCN) and the U.N. Economic Commission for Europe (UNECE).

“Fasten your seatbelts, ladies and gentlemen, because the next decade will be the critical decade,” said Inger Andersen, executive director of UNEP. “We hold in our hands this frightening responsibility to forever change the trajectory of our planet.”

The U.N. Decade on Ecosystem Restoration overlaps the timeline identified in 2018 by the world’s leading scientists to stop post-industrial average temperatures from rising to 1.5 degrees Celsius or more and prevent catastrophic climate change.

“We need to act now,” said Robert Nasi, director general for the Center for International Forestry Research (CIFOR), which jointly coordinates GLF with UNEP and the World Bank. “There is a huge cost for inaction. We need a call to action for forests,“ he said, urging world leaders to support an Earth forest summit to put forests on the global agenda.

IUCN is developing a tracking tool called the “Bonn Challenge Barometer,” which UNEP and FAO will use, among other tools, to monitor landscapes and to report to the U.N. General Assembly. Marine and coastal ecosystems are not yet included in targets, but UNEP and FAO say they intend to discuss with other U.N. entities how to incorporate them.

“We need to combine the old wisdom and experience with the new innovation, the ideas and that integration is what innovation is,” said Tim Christophersen, coordinator of the U.N. Decade on Ecosystem Restoration for UNEP. “Always bring in youth – bring them in – and get out of your meetings and go to theirs.

”Degradation is already affecting the well-being of at least 3.2 billion people, fueling fears of a mass species extinction and costing more than 10 percent of the annual global gross product in lost ecosystem services, according to the Global Partnership on Forest and Landscape Restoration.

Almost 40 percent of all land is used for farming. By 2050, degradation and climate change could reduce crop yields by 10 percent globally and up to 50 percent in some regions, the partnership states.

“We need to rethink the ‘how’ we approach farming and move from a monoculture mindset to one that is based on regenerative principles and incorporates all the benefits that natural based solutions provide,” said Frank Mars, a board member at Mars Incorporated.

Worldwide, some 2 billion hectares of land, a footprint the size of South America are degraded.

“We hear about floods in Africa, we hear about climate migration and cities running out of water, but underneath all this there is a new world emerging; the youth are stirring, the people are waking up, a new age of hope coming,” said Afro-roots musician Rocky Dawuni, who performed at the event.

“Are we ready to be that change in the world? Are we going to draw the line in the sand? That we will be the first line of defense . . . are we ready to do that?” 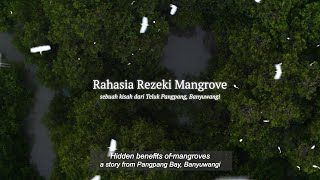 Hidden Benefits of Mangroves: A Story from Pangpang Bay, Banyuwangi