CIFOR is undertaking the FCCC project in collaboration with the DRC Ministry of Environment, Conservation of Nature and Tourism (MECNT), the University of Kisangani (UNIKIS) and a host of other partners, including Resources and Synergies Development (RSD), which coordinates the project, as well as The Virunga Foundation, the World Agroforestry Centre (ICRAF), WWF, University of Gembloux and the Jardin Botanique de Meise.

The 47-month project was launched in February 2013.

The main goal is to support the DRC’s capacity-building and applied research efforts to reduce deforestation and forest degradation and thereby mitigate climate change. The FCCC project comprises both academic and applied components. Specifically it is working to:

A survey of forestry research capacity in the DRC in 2005 revealed a striking shortage of professionally qualified staff in a country that depends so much on its forest resources. There were very few active scientists, MSc and PhD holders, either in MECNT or other DRC’s institutions including, L’institut pour l’étude et la recheche agronomique (INERA) and Insitut Congolais pour la Conservation de la Nature (ICCN). Clearly there was a need to increase research capacity if the forest resources of the country were to be conserved and sustainably managed in the future. From 2009 until 2013, with funding from the European Union, CIFOR managed the REFORCO project (Appui à la recherche forestière au Congo), which included support for dozens of MSc and PhD forestry students at UNIKIS.

FCCC expands on the success of REFORCO, by providing support for an additional 42 MSc and 11 PhD Congolese students focusing on issues of climate change, sustainable forest management and governance at – and in collaboration with – the Universities of Kisangani, Goma, Graben and Bukavu. The project also offers continued support for 13 doctoral students from REFORCO. Research projects relate to the DRC’s National Program for Forestry Research Priorities and curricula are aligned to the government’s plans to harmonize tertiary education across the country.

The FCCC project has coordination units led by RSD in Kinshasa, Kisangani and Goma, as well as two full-time CIFOR scientists working with the project, one at the University of Kisangani and one based in Goma to support all partners working in eastern DRC.

In addition to this investment in human resource development, the project also provides extensive infrastructural support for UNIKIS itself. This has included support for renovations of classrooms, lecture halls and offices, audio-visual and IT materials, field and forest survey equipment, and bringing Internet access to campuses.

2. Reducing pressure on Virunga National Park with trees in landscapes

The second major focus of the FCCC project is to support the sustainable management and integrity of the spectacularly biodiverse Virunga National Park landscape in North Kivu Province. Virunga, Africa’s oldest national park and a World Heritage site, is under enormous pressure. Civil conflicts and the Rwandan genocide have caused an influx of refugees, which in turn has led to a substantial increase in the demand for firewood and charcoal, the main source of household energy in the region. Much of this is being sourced from the forested hills inside and on the boundaries of the Park, leading to deforestation and environmental degradation.

In an effort to counter this and to reduce pressure on the Park, CIFOR has partnered with WWF to develop tree-planting programs with local farmers to meet subsistence needs and reduce agricultural pressures on the forests of the Park. The aim is to establish 3,000 hectares of plantations and agroforestry systems outside Virunga National Park, and also, in collaboration with the African Conservation Fund / ICCN, to restore 5,000 hectares of degraded lands inside the Park. ICRAF is supporting research into how existing agroforestry systems can be intensified and improved, to increase biodiversity and market access for local farmers. CIFOR is coordinating research on issues such as biomass estimation at the landscape scale, carbon finance, improving rural livelihoods and forest governance.

From outcomes to impact

The FCCC project views communication of its research findings as a key component. To this end, it will be producing documentary films intended for broadcast, guidebooks and technical manuals, and will ensure that its research outputs, including scientific articles, MSc theses and PhD dissertations, will be translated into factsheets, policy briefs and disseminated widely at workshops and conferences and through local and international media. CIFOR’s Information and Communications Group works closely with the project to ensure outcomes lead to impact with policymakers, forest users and other partners. 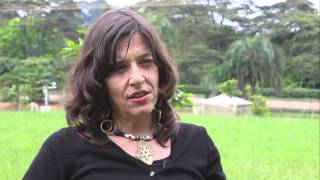 Emilie Smith Dumont, ICRAF scientist on her work with CIFOR in the DRC