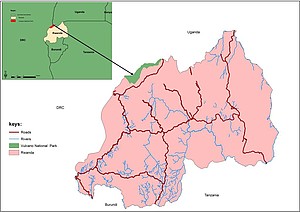 Between 2011 and 2012, a regional baseline assessment to assess vulnerability was conducted in five landscapes of the Congo Basin as part of the “Climate Change and Forests in the Congo Basin: Synergy between Adaptation and Mitigation (COBAM)” project. A briefnote entitled “Current vulnerability in the Virunga landscape, Rwanda” produced by Pavageau and her colleagues presented the results for the Virunga landscape around Volcanoes National Park in Rwanda.

Several national parks have been established in the area of Virunga Landscape, among them, Virunga National Park (772,700 ha), and Volcanoes National Park in Rwanda (16,000 ha), constitute some of the oldest protected area in Africa. The Virunga landscape covers an area of 15,155 km². Most of the land outside the protected areas is used for agriculture. In addition to subsistence agriculture, coffee, tea, cocoa and pyrethrum plantations are prominent land uses. The population density of the landscape, at 600 individuals per km², one of the highest in the region, is due to in-migration, which began in the 1960s with people attracted by fertile soils, and reduced mortality rates.

Volcanic highland mountains in Volcanoes National Park shelter the last of the world’s mountain gorillas as well as chimpanzees, golden monkeys, forest elephants and a rich variety of birds, reptiles and amphibians. Historically, various institutions have supported the conservation of this rich biodiversity. A consortium of four NGOs namely WWF, WCS, SNV and AWF was created to promote sustainable forest management and land-use planning. Despite some progress, forest resources are under threat and natural forest management continues to face high population pressure.

This study focused on 12 sectors of 4 districts (Burera, Musanze, Nyabihu and Rubavu) adjacent to Volcanoes National Park in the Western and Northern provinces of Rwanda. A participatory methodology was used to carry out the study.

Local perceptions of change. Local perceptions were captured during focus group discussions that aimed to explore changes from the 1970s to the present, in order to understand the multiple threats that may have affected the villages in the past, as well as processes of change in terms of coping mechanisms and social and ecological dynamics. Among historical disturbances, participants highlighted genocide, conflicts, political and social changes, and overexploitation of natural resources because of their impacts on livelihoods leading to famine. They noted that the mass exodus of hundreds of thousands of refugees took its toll on the environment. And the re-establishment of the community justice system – the Gacaca court for crimes committed during the genocide – had many implications for social organization in communities and indirect impacts on land rights and access.

Differentiated vulnerability. The analysis shows that different climate-related disturbances affect different groups, natural resources and activities differently. Problems caused by climatic variability tend to be compounded by mismanagement. Heavy rains certainly contribute to the degradation of arable lands, but the use of rudimentary cultural techniques is an important factor in erosion. Soil erosion on steeply sloping land results in water flows and siltation of lakes and rivers, but heavy rains are only an indirect cause. Indeed, erosion is largely attributable to the practice of cultivating steep slopes without applying methods of soil conservation, soil and water management, organic and mineral restitution, and avoidance of overexploitation.

Current adaptive capacity. The landscape is mainly domesticated and natural forest resources do not make a major contribution to local livelihoods. Most of the safety nets during periods of stress are developed outside the forest through efforts to diversify activities. Infrastructure, land-use planning and domestication of the landscape constitute other main responses to the stresses (e.g. use of terracing, channeling of water flows, improvements of roads, installation of water tanks). These initiatives are generally supported by public policies or external actors, mainly development agencies. The gorilla-based conservation scheme has been a tremendous factor behind economic development in the region and is largely held up as a success story in Africa. Increased devolution of authority to the local level and shifting of responsibility to local communities have contributed towards the strengthening of adaptive capacity in the region. Some of the solutions to climatic stresses that participants referred to, such as installation of water tanks, were supported by the redistribution of tourism revenues from the park to local communities. However, the level of returns for the local population is not equivalent to the increasing population pressure. Rather, this new economic development has mainly benefited tourism investors and well-connected cooperatives. Restrictions on access to natural resources and poor access to land for marginalized groups have actually increased their vulnerability.

Looking ahead. Possible approaches to improve adaptive capacity include fostering agroforestry and restoring abandoned lands. However, as the shortage of available land prevents the establishment of large plantations, strategies need to be developed for marginal lands, and would then require coordination of multiple individual activities. The selection of appropriate species that are compatible with agricultural production could generate benefits for individuals and incentives to conserve trees. Possible strategies would be to introduce mechanisms to reduce overexploitation of fuelwood and to encourage transformation and valorization of residues. The insights generated through the vulnerability baseline assessment in the Virunga landscape will be combined with more in-depth research to explore future vulnerability and to identify synergies between mitigation and adaptation in the project sites. Results from further analyses and evaluation of future strategies will be used to generate recommendations to inform decision-making and planning at local and national levels across countries in the Congo Basin.