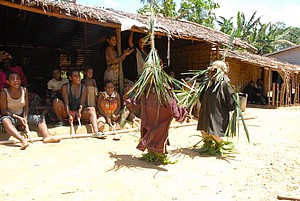 “In the 70s, forest was abundant and surrounded the villages, but now resources are becoming scarcer,” say villagers in eastern Cameroon. “We have to walk 5 km to hunt and to collect wild mango [from the forest].”

With changes such as this, along with more erratic rainfall patterns, stronger winds and population growth, the forested area of eastern Cameroon is becoming increasingly vulnerable to the effects of climate change. Yet the area still offers great potential for climate change mitigation. Researchers from CIFOR and SEI, collaborating on COBAM, presented these findings and more in their working paper titled “Current Vulnerability in the Tri-National de la Sangha Landscape, Cameroon”. This study is part of a series in which COBAM researchers analyze current and potential mitigation and adaptation actions in the Congo Basin, to identify as many synergies as possible.

The Tri-National de la Sangha landscape in eastern Cameroon was one of the study sites for the western part of the Basin. The team used participatory methods to identify how the climate had been changing over time, the associated impacts on livelihoods, and the resilience of individuals and communities. A survey elicited responses from 240 households from 4 villages, a cluster of which also participated in focus group discussions.

“Vulnerability is the combination of discrete and/or gradual multiple stresses and livelihood conditions,” the researchers reported. Prolonged or unexpected dry spells and wet seasons, changes in the intensity of rainfall, erratic rainfall patterns, water shortages, strong winds and pest invasion/diseases are some of the climate disturbances that villagers are experiencing. The combination of these effects with competition over land and forest resources and changes in the global economy has led to increased vulnerability. Agriculture has been expanded in response to population growth and rising market prices, which have led to a shift from subsistence farming to the cultivation of cash crops across larger areas; in particular, cocoa is gaining in importance. A decrease in primary and secondary forest cover, attributable to population growth and timber and mining concessions, is making it more difficult for local people to find non-timber forest products (NTFPs), bushmeat and fish. As all of these are critical for their livelihoods, the shortages are having adverse effects on health, income, food security and general well-being. However, climate-related disturbances affect different groups, natural resources and activities differently. In particular, the elderly and children are the most vulnerable groups, and agriculture is more sensitive than forest and forest-related products.

Helping local populations plan for uncertainty is a key step in improving their adaptive capacity. Key recommendations from the study are to diversify livelihoods, increase villagers’ access to resources, inform people about climate change and encourage collaboration among stakeholders. NTFPs offer one way of diversifying livelihoods, through capacity building, cultivation of NTFPs in agroforestry systems, improvement of processing and storage of NTFPs, and development of a commercialization strategy. Another way would be to support apiculture, aquaculture, production of medicinal plants and animal husbandry. If collective action were strengthened, the community as a whole would benefit, especially in the case of community forests, through resource use and benefit sharing norms. In addition, an increase in agricultural yields, achieved through the adoption of improved practices, would boost community well-being while minimizing the threat to forested areas. The working paper also recommends establishing a participatory monitoring and evaluation system that would raise awareness about the negative impacts of deforestation and provide conservation and forest management entities with relevant information.

Although it emphasizes adaptation, the study also calls for more in-depth research on the potential for mitigation in the landscape, to be followed by analysis of potential synergies. The working paper points out the relevance of pilot projects, such as those supported by COBAM, for research, monitoring and building capacity. One such pilot project is in Yokadouma, implemented by ROSE and supported by COBAM and the African Development Bank since 2012.