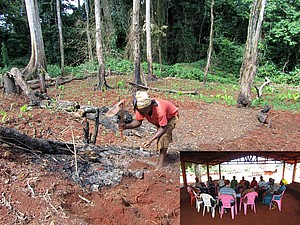 SEI Oxford and CIFOR CARO have been collaborating, in the frame of COBAM, on efforts to uncover potential future drivers of change, which could support the understanding of the impacts and potential reactions of local populations towards climate change.

Following a baseline vulnerability assessment in 2011 and household interviews in 2012, SEI Oxford conducted fieldwork in two villages in eastern Cameroon from 22 April to 14 May this year, with the support of CIFOR. The researchers, working with local partner ROSE (Resseau des ONGs locales du Sud-Est Cameroun), employed Knowledge Elicitation Tools (KnETs) in several villages, including Mang and Djalobekoue. KnETs use a simple, participatory process to elucidate decision-making behavior and reveal “tacit” knowledge. The aim is to uncover potential future drivers of change (not only climate) through the use of scenarios that include adaptation and mitigation strategies, among others. A machine learning algorithm is then used to represent, verify and validate respondents’ answers in a structured and systematic way.

The use of KnETs makes it possible to assess how informants view their constraints and options in decision making. Each decision-making framework is unique as it is based on cultural criteria which are important to understand. In this case, the decision-making framework was studied through the formulation of various potential future drivers of change that could shape future vulnerability. The methods were tested in Mang, one of the villages in the project area, and validated in Djalobekwe.

The field trip reinforced the good working relationship established with the CIFOR team in Yaoundé and local partner ROSE, based in Yokadouma, which provided strategic and logistic support during the fieldwork.