Since October 2013, COBAM’s researchers have been carrying out research across four countries in the Congo Basin on the availability of information and knowledge related to climate change adaptation and REDD+ in the region, from 2008 to 2013. The specific objectives of the study are:

The methodology used comprised two phases. The first phase consisted of the collection and the review of official documents, publications and grey literature in order to identify relevant concepts, actors and stakeholders implicated in climate change adaptation and REDD+. In-depth interviews constituted the second phase. Here is the story of experience in the field.

Cameroon, the Democratic Republic of Congo, Republic of Congo and Gabon were targeted for data collection. The team worked with a large array of actors representing different groups of stakeholders, including donors, government, NGOs and the private sector, at national and international levels.

In general, the interviews were conducted in a very enthusiastic atmosphere with the interviewees being very excited about sharing their knowledge with regards to the climate change issue. In Cameroon, for example, the researchers were impressed by the high level of awareness of some of the non-scientific actors on climate change concepts.

However, research isn’t all peaches and cream, and COBAM researchers found some difficulties.

Difficulties like this also constitute some of the findings of the study, already throwing some light at the research questions. In this sense, initial findings suggest a need for better coordination among actors both outside and inside organizations, the importance of centralizing data and documents on climate change and the need for popularization of related concepts. 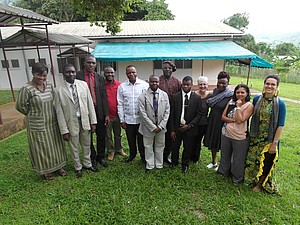