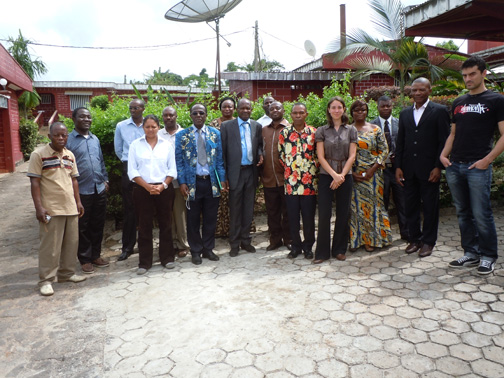 Group of participants to the training workshop

The COBAM project team organised a training workshop from 16 to 20 April 2012 targeting pilot project holders on adaptation and mitigation to climate change. The main objective was to reinforce the capacity for designing local projects addressing the issues of adaptation and REDD+ in synergy. There are few successful experiences in the region on setting up REDD+ projects. Project holders are often poorly equipped to conceive projects that are aligned with the requirements of the REDD+ mechanism.

The workshop was opened by Dr Bihini Wa Won Musiti, coordinator of the management unit of PACEBCo et by Dr Eba’a Atyi Richard, regional coordinator of CIFOR for Central Africa.This workshop also benefited from the experience of Samuel Nnah Ndobe, from the Center for Environment and Development (CED). CED is one of the first organisations in Central Africa that have developed a project on payment for ecosystem services based on carbon value. According to M. Nnah, the success of a REDD+ project depends mostly on the implication of communities within the project. For that reason, project holders must play a significant role of facilitation and dialogue with the local communities.

The workshop also focused on the importance of adaptation to climate change. Adaptation projects directly impact communities and aim to increase the resilience of their livelihoods to multiple stresses. Including adaptation aspects into the project design ensures co-benefits for local populations.

A dozen members of national and regional NGO as well as state institutions participated from Cameroon, the Democratic Republic of Congo, Rwanda and Equatorial Guinea, whose projects are highly focused on community approaches. Those projects are developed in PACEBCo landscapes presenting major ecological and social issues. Project holders have shown great interest in adaptation approaches whereas REDD+ was rather viewed as a bonus, considering all the uncertainties around the mechanism. According to one of the participants, adaptation is “a research-action and development line that deserves to be investigated closely given the vulnerability of local populations”. Finally, the workshop resulted in the creation of a network of exchange and experience sharing among project holders.