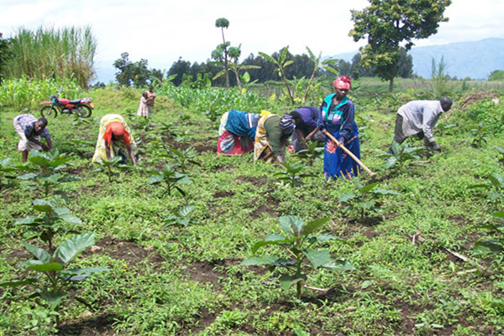 A women’s cooperative planting trees in the Volcanoes National Park

In its fight against climate change, Rwanda, a country with low forest cover where most of the land is occupied, clearly gives priority to adaptation. At the foot of the Volcanoes National Park, torrential rains often cause flooding and landslides on the eroded slopes.

During a field trip from 17 to 25 May, researchers of the COBAM project visited the Rwandan site situated in Virunga landscape around the Volcanoes National Park. At a series of workshops, local leaders, communities and minorities shared ideas on local strategies to face climate uncertainties and to protect the environment. They noted that some approaches to combating soil degradation such as forestry and agroforestry plantations also participated in carbon sequestration. Although these strategies may create substantial benefits, their real effectiveness still needs to be demonstrated. This is the objective of the pilot project led by the national NGO ARECO-Rwanda NZIZA (Association Rwandaise des Ecologistes) as part of the COBAM project.

A few salient points that characterise the area: pressure to obtain lands in the midst of conflicts exacerbated by demographic growth due to massive population influx to the volcanic region where lands are fertile. The only natural forest remaining in the region is situated in the national park, but this area is also threatened by degradation. To contribute to the conservation of this forest, ARECO adopted an innovative approach that consists of promoting agroforestry through both individual initiatives and community actions based on local cooperatives. The people involved are seeking to plant tree species they feel are important in small areas of degraded or undeveloped lands, while maintaining or increasing agricultural production.

Furthermore, historically marginalised people are often considered as the most vulnerable to climate disturbances. Their expulsion from the national park has not been compensated by access to new lands. ARECO aims to integrate them as full-fledged members of the project, especially to develop tree nurseries in areas adjacent to the park.