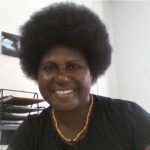 Barbara is the first female director of The Nature Conservancy’s program in Papua New Guinea. She has been working with TNC for over 13 years. She has facilitated various MOUs between TNC and various government departments. She has project management skills and her work with the West New Britain provincial government resulted in the program being institutionalized in the Fisheries Division, and then the Division of Forests Environment and Climate Change. As project manager of the USAID IUCN MARSH (Mangrove), she guided the project to ground-breaking results in less than a year in the development of mangrove policies for West New Britain and Manus provinces. Barbara studied journalism, with a special focus on world history and Pacific politics and graduated from the University of Papua New Guinea with a Bachelor of Journalism in 1993. She also has a certificate in Pacific NGO Leadership and Management from the Unitec Institute of Technology in Auckland, New Zealand.