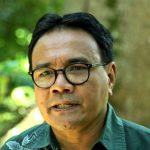 Daniel Murdiyarso is currently holding a position as senior scientist at the Center for International Forestry Research (CIFOR). He received his first degree in Forestry from Bogor Agricultural University (IPB), Indonesia. His PhD was obtained in 1985 from the Department of Meteorology, University of Reading, UK. He is a Professor at the Department of Geophysics and Meteorology, IPB. His research works are related to land-use change and biogeochemical cycles, climate change mitigation and adaptation. He has published a large number of articles in peer-reviewed journals and book chapters on these areas.

Dr Murdiyarso played an extensive role in the Nobel Peace Prize-winning IPCC when he was a Convening Lead Author of the IPCC Third Assessment Report and the IPCC Special Report on Land-use, Land-use Change and Forestry. Recently he served as Review Editor of the IPCC Fourth Assessment Report. In 2000 he served the Government of Indonesia as Deputy Minister of Environment for two years, during which he was also the National Focal Point of the UNFCCC and CBD. Since 2002 Professor Murdiyarso is a member of the Indonesian Academy of Sciences.