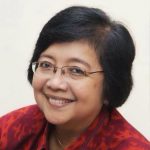 Siti Nurbaya obtained her PhD in Environmental Science in 1998 from a joint program between Bogor Agricultural University and Siegen University, Germany.

She began her career as a government officer at Lampung Provincial Government in 1981 and a few years later was appointed as the Deputy Head of Provincial Development Planning Office. In 1998 she was transfered to Jakarta, assigned as the Director of Planning Bureau in the Ministry of Home Affairs, and in 2001 was promoted as the Secretary General of the Ministry. For the period of 2006 to 2009, she became one of the first Indonesian’s Senators. In October 2014, H.E. President Jokowi appointed her to join the current Government Cabinet, to serve as the Minister for Environment and Forestry, newly consolidated portfolio from two previously Ministry of Forestry and Ministry of Environment, housing more than 16,000 national civil servants. The Ministry also serves as the focal point for climate change issues.

Video:
ALL | The Hon. Josh Frydenberg