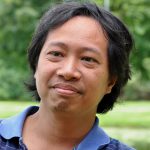 During his time as a research scientist at Center for Marine Research, Ministry of Marine Affairs and Fisheries, Indonesia, a post he has held since 2005, Novi S Adi has mostly been working in a cross-cutting area between ecology and spatial sciences. He earned his Doctorate degree in Marine Remote Sensing, with his thesis on mapping and modeling seagrass biophysical aspects, from The University of Queensland, Australia. Using techniques, such as remote sensing, GIS and spatial pattern analysis, he attempts to study the relationships between spatial pattern and arrangement and the corresponding ecological phenomena in coastal and marine environment at multi scales. During 2010-2012, Adi received a research grant from The Japan Aerospace Exploration Agency (JAXA) to form free-of-charge ALOS-1 satellite data for an accepted research proposal on the extraction of seagrass biophysical parameters using satellite remote sensing data. In addition to working on marine spatial ecology aspect, he is currently coordinating research projects on coastal ecosystem services related themes, including coastal carbon.