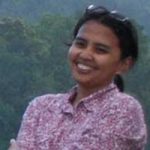 Anisa Budiayu received her Masters degree in Coastal Environmental Management from the European Institute for Marine Studies, University of Western Brittany, France, and her Bachelors degree in  Marine Science from Bogor Agricultural University. Budiayu joined The Nature Conservancy (TNC) in 2012 to work with related stakeholders and the community in Berau District, East Kalimantan, to ensure development of Berau MPA, which also includes mangrove areas. In 2014, Budiayu transferred to TNC Jakarta to support other TNC Indonesia coast and ocean sites. She is also the appointed coordinator  of the TNC Indoesia Blue Carbon and Mangrove Project, which was started in 2015 and has initiated a mangrove and blue carbon demonstration site in Berau district, East Kalimantan.