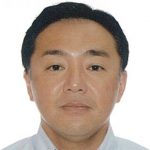 Tsuyoshi KATO has been managing two forest plantation companies in West Kalimantan, Indonesia since 2010. The companies are the joint venture between Sumitomo Forestry Co., Ltd. in Japan and Alas Kusuma Group in Indonesia. He completed Ph.D. program without a Ph.D. degree, Graduate school of agriculture, Kyoto University. His major study was forest ecology, and he conducted a field survey for more than five years to understand a recovery process of a tropical forest after commercial logging in Jambi, Sumatra, Indonesia. After working as a junior fellow researcher of the Center for Southeast Asian Studies, Kyoto University, he engaged a JICA expert for the project of demonstration study on carbon fixing forest management, from 2003 to 2006 in Indonesia. In April of 2006, he entered Sumitomo Forestry. When he conducted a preliminary survey of vegetation and soils in West Kalimantan in 2007, he faced unregulated land clearing mainly by local people, which caused rapid destruction of peat swamp forests. Since poor economic activity was one of the main reasons, Sumitomo Forestry decided to start a forest plantation project in a degraded peat swamp forest on with their partner to contribute to local economic development as well as forest preservation in a landscape. He and his group made a plan to enhance a wood productivity but reduce ecological impacts on peatland based on comprehensive and intensive field data. Also, he started a joint study with Kyoto University to monitor the CO2 Flux in the forest plantation.