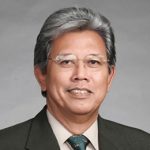 Wahjudi Wardojo is Senior Advisor for Conservation Policy, The Nature Conservancy (TNC), Indonesia. In this position he works closely with the TNC’s International Climate Policy Team at international, regional, and national levels. He is also a member of United Nations on Sustainable Development Solutions Network (SDSN)-Indonesia Chapter (2013), a member of the Netherlands Academy on Land Governance (LANDac)’ Land Forum of Utrecht University, Netherlands (2013), a member of Advisory Board for School of Life Sciences and Technology, Bandung Institute of Technology (2014-2017).

He has vast international experiences in the field of forestry, forest-related and conservation activities and climate change. He was a member of Advisory Committee for Director General of UNESCO on Biosphere Reserve (2002-2005), Board of Trustees for Centre of International Forestry Research (CIFOR 2006-2009) and led Indonesian delegation to a number of international forestry-related meetings, eg. UNFCCC, UNFF, UNCBD, IUCN and FAO. Mr. Wardojo was Chairman of the ASEAN Senior Officials on Forestry (ASOF) in 2006. Dealing with forest climate-related activity he was a lead person of Indonesia Forest Climate Alliance (IFCA 2007-2008), a forum under the Ministry of Forestry worked with various stakeholders in preparing Indonesia readiness on REDD+.